This blog contains spoilers for the first and second Witcher games.

I struggle to make choices in my day to day life, often leaving important decisions to the last minute. However, my decisions are usually more along the lines of whether to order eggs benedict or pancakes for brunch, whether to accept the fact I’m ill or go to a coffee date sick, and whether to write my blog or procrastinate and play more video games. I’m not used to making decisions that affect my entire country and the ones around it, as Geralt does in the Witcher 2: Assassins of Kings.

Assassins of Kings picks up immediately after the first game with Geralt saving King Foltest of Temeria. Foltest then decides that Geralt is incredibly important to his personal safety, and requires the witcher to be with him at all times. This works well (other than being quite inconvenient to Geralt, and his lover, Triss), until, during a battle against the mother of his bastard children, Foltest is assassinated and Geralt takes the blame. After Geralt’s arrest, he is thrown in the Temerian dungeons, where he manages, after only a minimal amount of torture, to convince Vernon Roche, head of Temerian Special Forces, of his innocence. Roche then aids in his escape and together with Triss and the rest of the special forces, they set out to find the true murderer of the king.

You would think that finding the murder of a monarch would be enough story for one game, but this is the Witcher, and therefore it’s little more than a starting off point. Most of Assassins of Kings revolves around a choice made near the end of act one, does Geralt stay with Roche and his men, or join the rebel elves in the forest? It’s a decision that initially seemed easy to me. Roche had saved Geralt from the dungeon and the elves (or Scoia’tael as the rebel non-human faction is known) had attacked them on their way to the village of Flotsam. Of course, I wanted to stick with Roche.  But as the story continued, the choice seemed less obvious. Sure, Roche’s men seemed to be good guys, but I was certainly less sure of the other humans in Flotsam. For one, most of them seemed ready to kill their innocent non-human neighbours at the drop of a hat as punishment for the crimes of the Scoia’tael. Secondly, at least half of the village seemed to be involved in the dastardly schemes of the village leader, Commandant Loredo, who is a drug-dealing, elf-kidnapping, murderous creep. The Scoia’tael, on the other hand, seemed prepared to help Geralt clear his name and find answers about his missing years. Suddenly they didn’t look too bad.

The second Witcher game expands on the choice-and-consequence system from the first, and is many ways, is much more effective at it. The first Witcher game suffers from what I like to call “Middle Choice Syndrome” and it’s not alone, pretty much every RPG that lets the player make story effecting choices has the same problem. Middle Choice Syndrome is where you can choose to save team A or team B, or, with a teensy bit of extra work, save both. You can side with the corrupt city guard or the mafia bosses, or with an extra quest or two, you can be Batman. It’s basically that third choice that gets you out of making a difficult decision. I love Bioware to pieces, but Mass Effect 3 and DragonAge: Origins are particularly guilty of this. The original Witcher’s third option comes at the end of the fourth chapter when Geralt must choose between fighting for the Order of the Flaming Rose or the local branch of Scoia’tael, or he can remain neutral as Witchers traditionally do. While this isn’t the traditional type of Middle Choice (which usually seems to give you the best of both worlds), it certainly lets the player avoid having to make any difficult moral choices by compromising Geralt’s beliefs, as neither the Order nor the Scoia’tael fully alines with them.

There’s no such middle way in Assassins of Kings. Geralt is given a flat-out choice, Roche’s men or the Scoia’tael, there is no compromise. Not only that, the choice feels very rushed, in fact, the initial part of the choice (whether or not to return the leader of the elves’ sword to him after pretending to capture him as bait for the Kingslayer) is literally timed. There is a point afterwards where you can change what you chose if you regret your choice (or for those of you, who like me, viewed Geralt giving Ioveth back his sword as a way of paying his debt), but there is a lot of other stuff happening around Flotsam at the same time. It never really feels like there is time to think about it and make a rational decision. It’s something based on emotion, which is a hugely powerful thing, and an excellent piece of writing and design by CDProjekt Red.

In light of that decision, it’s been very interesting talking about the game with my partner and friends who have played it. Out of all of them, I’m the only person who chose Roche’s path on my first playthrough. Many of my friends chose the Scoia’tael as a reaction against the racism of the humans, they didn’t want to silently stand by while people joked about killing elves. I have to admit, after being around the humans of Flotsam, that was my natural inclination too. What changed my mind was actually a carry-over from a decision I made in the first game. During his trip to Vizima in the first Witcher game, Geralt meets the fence (and Temerian spymaster), Thaler. In my game, Thaler helped Geralt multiple times, so when he was threatened by an asshole from the Order of the Flaming Rose in chapter three, Geralt (and I) had no issue coming to his aid. If you save Thaler and load your choices from the first game into the second, he sends you a message while you’re in Flotsam in the second. That message is essentially, “No matter what, trust Roche.” And because I had previously made the decision to trust Thaler, it made sense for my Geralt to trust Roche.

But CD Projekt Red doesn’t just stop at making the decision itself difficult, Assassins of Kings also radically changes the second act of the game, depending on whether you chose Roche or the Scoia’tael. Who you choose decides which armies camp you are sent to in the second act, and whoever’s camp you choose, you won’t get to see the other (at least not properly). Not only that, but the important choices you make within the second act become totally different, and relate to characters who you will exclusively in those areas. That initial choice the player makes opens up different stories and options for Geralt, just as making difficult decisions in life opens up different options and experiences for us outside the game.

It’s that parallel to real life that makes the second Witcher game so powerful. In real life, it’s very rare that there is a third easy way, and often the right choice isn’t obvious. The people we meet and the experiences we have beforehand all affect our future choices. Having a game imitate that and all the emotions that come along with that not only is a great achievement in writing and game mechanics, it also makes for a very emotionally affecting piece of storytelling. I haven’t felt so connected to a game for a very long time, and I’m really grateful to Witcher 2: Assassins of Kings for giving me that experience. 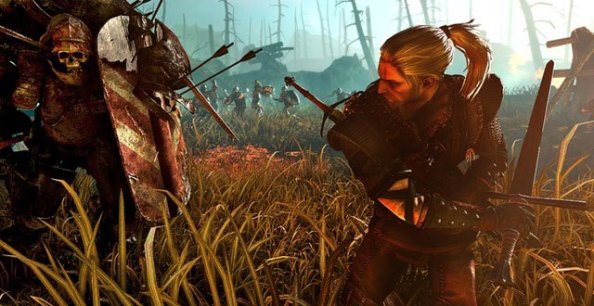 I also wrote a blog on the first Witcher game, and it can be found here.